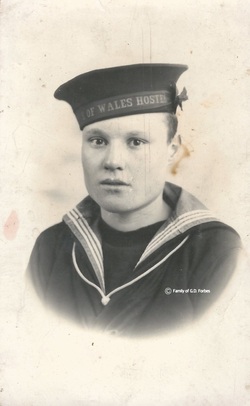 George Dallas Forbes was destined for a life at sea. Before joining the Royal Navy George was enlisted at The Prince of Wales Sea Training Hostel for Boys. This Merchant Navy seamanship training school was considered to be one of the best and most up-to-date training establishments of its kind in the United Kingdom. The hostel was situated in Church Row, Limehouse, London and was well equipped. The hostel contained all the requisite apparatus for nautical instruction. The training lasted about six months.

Boys were specially chosen for admission to the hostel, and had to have met a strict criteria. A boy must have had excellent references as to their character. Be between the ages of 14 and a half and 16, and be able to swim 100 yards. The boy must also be able to obtain the Board of Trade Sight Certificate for both form and colour vision. The trainee must have passed a medical examination certifying that they are sound and strong and in all respects physically qualified for employment. Finally the boy must have been at least 5 ft 1” tall.

At the outbreak of World War Two the Limehouse building was requisitioned and the hostel moved to Ingham in Norfolk. Many of the boys who attended the training school were lost in World War Two. A dedicated memorial to the men of The Prince Of Wales Hostel who died during the Second World War can be seen by clicking here. 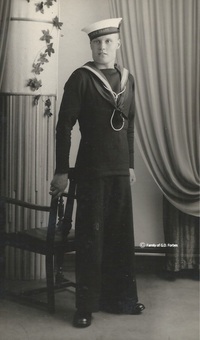 On joining George was streamed into seamanship and his rate on entry was Ordinary Seaman. It is highly probable the reason he was made a seaman in the Royal Navy is due to his experience as a seaman at Limehouse. 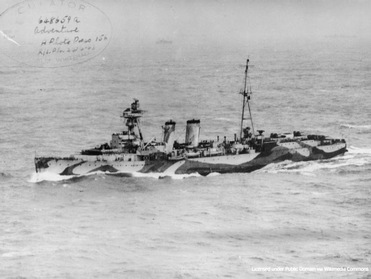 After training George joined the British Cruiser-Minelayer HMS Adventure on 17 June 1939. HMS Adventure was the first vessel of her type and was completed in 1927. During World War One the more extensive mine-laying operations had been carried out by large converted merchant vessels or liners and even old warships.

HMS Adventure was specially constructed for this particular work and saw service throughout World War Two. George remained on-board HMS Adventure until 28 February 1939. While on-board George was rated up to Able Seaman. 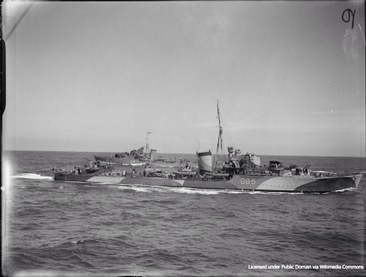 George Forbes joined the brand new HMS Jupiter on 22 June 1939. HMS Jupiter was a J-class destroyer launched on 27 October 1938 and commissioned on 16 June 1939. While on-board George was rated Acting Leading Seaman (Ty).  The abbreviation ‘(Ty)’ signifies a temporary position. Often, men were appointed into acting roles. These appointments were for temporary periods; no-one really expected a war, let alone for it to last six years and one day.

George was drafted off HMS Jupiter on 18 November 1940. It appears by looking at his Certificate of Service, passed to me by his family, that George volunteered for submarine service. C in C Plymouth approved his transfer on 27 June 1939. However, George did not start his submarine training until 19 November 1940. This delay was probably owing to the Second World War starting in September 1939. Fortunately George had left HMS Jupiter by the time she struck a mine and sank on 27 February 1942, during the Battle of the Java Sea. 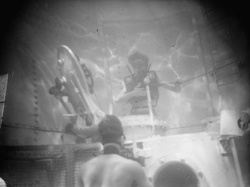 George arrived at the Royal Navy Submarine Training School at HMS Dolphin on 19 November 1940. This is where George was taught how to be a safe submariner. In December of 1940 George successfully completed his DSEA (Davis Submarine Escape Apparatus ) training. The DSEA can be seen in operation at the photograph on the right. 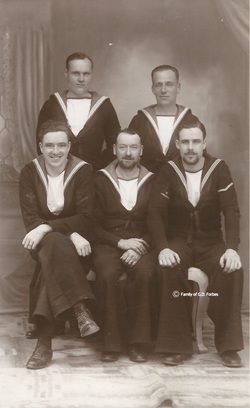 The photograph on the left shows George (top left) with four of his pals from Unbeaten. Including John (Pop) Stockwell (middle bottom).  However George's service records show that on Unbeaten's arrival at Malta George was billeted in HMS St Angelo which was a large fortification in the centre of the Grand Harbour at Malta. It is likely that George was instrumental in the setting up of the famed 10th Submarine Flotilla in September 1941.

The 10th Submarine Flotilla's headquarters were located in the old Lazaretto which was converted and commissioned as HMS Talbot. Records show that George joined HMS Talbot on 15 September 1941 as an Acting Petty Officer (Ty). His records show that George was part of the spare crew who worked at HMS Talbot and relieved men on many submarine patrols. George was the Second Coxswain. This saw him on-board Unbeaten for large parts of the action, like the sinkings of the German U-Boat U374 and the Italian submarine Guglielmotti. 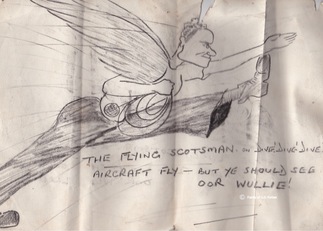 On 12 January 1942 HMS/M Unbeaten torpedoed and sank the German U-Boat U374. Thirteen minutes after the first salvo of torpedoes had been fired; George Forbes climbed the conning tower ladder, armed with a heaving line. A hapless German submariner was spotted treading water close abeam. The weather was pretty rough up top; it was a dangerous place to be. The enemy submariner was floundering around in a sea thick with oil, while at the same time being buffeted by the wooden slats ripped from the sunken U-boat’s upper-deck.

George and one of the officers managed to haul the bedraggled German up over Unbeaten’s fore-planes, along the casing, then up the conning tower to the bridge, where he was passed down the ladder to inside HMS/M Unbeaten. The conning tower hatch was clipped shut and the boat dived immediately. The whole rescue evolution only took four minutes. Hans Ploch, rescued by George Forbes, was the only survivor from U374. 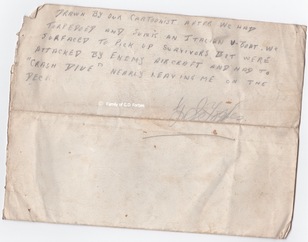 On 17 March 1942, HMS/M Unbeaten torpedoed the Italian submarine Guglielmotti. HMS/M Unbeaten surfaced in an attempt to pick up any possible survivors from Guglielmotti’s crew, of whom about twelve were spotted floundering in the water. Unbeaten's Captain wrote in the patrol report: ‘Survivors all appeared to be wearing “collar” life jackets.’ As before with the German U-Boat U374, George Forbes was called forward to recover the Italian submariners from the water.

However, owing to the close proximity of several enemy fighter aircraft, Unbeaten's Captain had no option but to crash dive Unbeaten to save his own crew. The above cartoon depicts George racing along the casing from where he climbed up the conning tower and threw himself down the hatch closing it behind him. George just made it before Unbeaten disappeared under the sea as can be seen by his writing on the rear of the cartoon. As a result of Guglielmotti's sinking, Unbeaten was depth charged but escaped. The Italian archives say that one body was found and that a total of 7 officers and 54 ratings were lost from the Italian submarine. 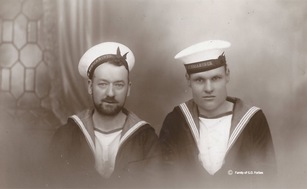 George Forbes, here on the right, was integral to the seamanship operations of HMS/M Unbeaten and features several times in the book 'Being Silent They Speak'. I would very much like to thank Sylvia and Michael, the Niece and Nephew of George Dallas Forbes for allowing me to share the photographs and information about their Uncle George.

After George went missing his mother never locked her front door until the day she passed away, as she always expected him to return.

Along with several other members of the crew of HMS/M Unbeaten, George Forbes was posthumously awarded the Distinguished Service Medal (DSM) for his actions during those arduous operations in the Mediterranean.