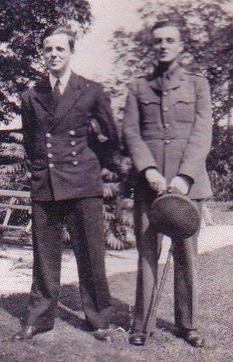 Pat Cannon (Left)
The day before Unbeaten would embark on her last war patrol from Malta, another name synonymous with the final days of the submarine would join her alongside at the besieged Lazaretto. Sub-Lt Patrick W. Cannon arrived on board on 11 March 1942. Promoted Lieutenant in April of the same year Patrick would eventually go on to become Unbeaten’s last First Lieutenant.

Pat was born on the 21st August 1921 in Lincolnshire, he graduated from the Royal Naval College, Dartmouth in 1939. Cadet Cannon achieved the highest place in the grand aggregate of marks in the Passing Out Examination at the Britannia Royal Naval College, for that entry.  While there he was also awarded the Kings Dirk, the Kings Gold Medal and the Robert Roxburgh prize. The photograph on the right shows Pat Cannon with his brother John in 1942. 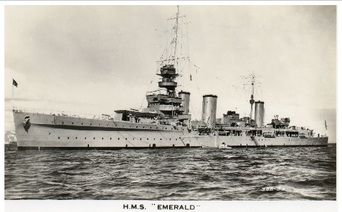 Pat Cannon's first ship, as cadet and then midshipman, was HMS Emerald in which he served from 1939 until 1941. Upon he achieving the rank of acting Sub Lieutenant Pat Cannon went on to attend the arduous submariners training course at HMS Dolphin. It is unsure if he was a volunteer for submariner service. However a large amount of Royal Navy men did indeed volunteer. 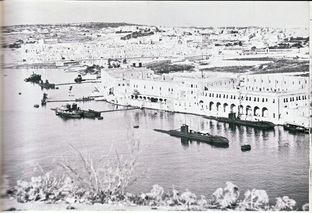 HMS Talbot at the Lazaretto Malta
In 1942 Pat Cannon was posted to HMS Talbot located in the Lazaretto at Malta. According to the Navy List of that year Sub-Lieutenant Cannon also served on board the U-Class submarine HMS/M Upright, among other submarines. Lt Cannon was a relief officer with the 'Fighting Tenth' Submarine Flotilla based at Malta. 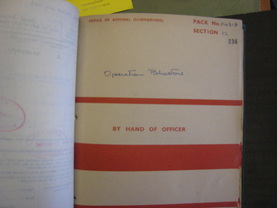 Top Secret Operation Bluestone File
As the last First Lieutenant of HMS/M Unbeaten, Patrick Cannon would have been instrumental in the successful outcome of the submarines final and fateful mission in November 1942, Operation Bluestone. This operation was to see the submarine land an SOE agent into Vigo in Spain. The submarine then escaped into deeper waters, never to be seen again.
My sincere thanks must go to Mike Cannon, nephew of Patrick Cannon for taking the time to contact me and provide me with the photograph and career history of Lt Patrick W. Cannon.