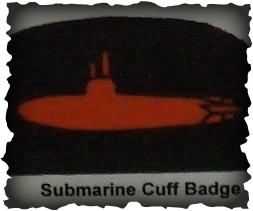 The First Royal Navy submarine cuff badge was introduced for ratings in 1958 but proved unpopular and was commonly described as the 'pregnant sausage' or 'sausage on a stick'. Owing to this few were actually worn. Depicting a submarine embroidered in gold on dark blue cloth, red on dark blue cloth and blue on white cloth, it was worn on the left cuff.

The badge was never officially issued but was available through private purchase. Perhaps this was the real reason for its unpopularity. 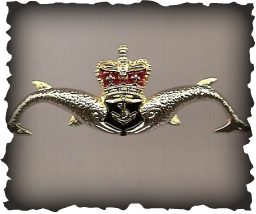 On the 15th of July 1971 the first officially issued pin badges were awarded at a ceremonial divisions. Nicknamed the 'Kissing Dolphins' or 'Kissing Kippers' they are still worn with great pride today. The badge consists of a fouled anchor below a St Edwards crown with an inward facing dolphin on either side.

All ranks and rates wear the same insignia on the left breast above any medal ribbons. The submarine badge is now universally known as 'Dolphins'.

This lone World War Two submariners cap shown below, was left ashore in Malta by a crewman from the U-Class submarine HMS/M Undaunted. The submarine was overdue at Malta on 13 May 1942. The mystery of her disappearance is still unsolved today.
Many Thanks to Mr Baz Craker at the RN Submarine School for the above historical data