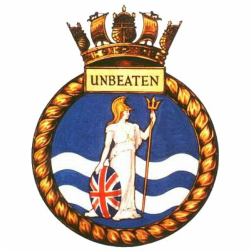 His Majesty's Submarine Unbeaten was a group 1 British U-Class  submarine, laid down for build in 1939. Unbeaten was one of several U-Class group 1, single hulled coastal submarines ordered by the Admiralty in early 1939 and built by the British ship-builder Vickers Armstrong of Barrow-in-Furness. These relatively small sized boats measured around 190 feet in length or approximately 58 meters in new money. The first three boats of this type were ordered in 1936 and were originally designed to re-place the smaller, ageing H-Class submarines as vital anti-submarine training boats. The hulls of HMS/M Undine, Unity and Ursula were eventually laid down in February 1937, and thanks to some inspired foresight during their build, they subsequently underwent a few modifications which would be carried on through future U-Class builds.

After rigorous sea trials the early Unity-Class boats performed well and demonstrated excellent handling and manoeuvrability. These submarines proved to be cost-effective and relatively easy to produce. During World War Two the U-Class submarine went on to prove itself. The fact that this class of submarine could perform well in theatres of operation surrounded by shallow waters like the Mediterranean, combined with the inevitability of war prompted the Admiralty to put this submarine type into quantity production. Twelve submarines of this class were ordered without delay. Unbeaten was launched on the 9th of July 1940 at the Barrow shipyard.

The design of the U-Class group 1 submarine did not change much from the original concept. However, the majority of the next 12 ordered through the War Emergency Programme did, prior to build, have the amount of torpedo tubes reduced to four. Unbeaten was one of these. During the 1940-41 war programmes another 41 submarines were ordered. Of this second group of U-Class boats only 34 were ever completed. Unbeaten was commissioned into service on Sunday the 10th of November 1940. The new submarine was given the pennant number N93. This moniker was painted in very large white letters on her conning tower. 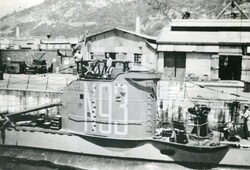