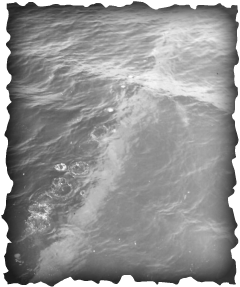 A sight you never want to see!
It has been said that without some form of offensive weaponry a submarine would be virtually useless during periods of conflict. The weapon of choice for a submarine has an aged pedigree, with the first prototype being developed and produced by Robert Whitehead in 1866. The weapon in question is the 'Torpedo'. Whitehead was greeted with a healthy form of scepticism and even opposition early in his career. Some Royal Navy gunnery officers of the day dismissed his invention and called it ‘the device of the Devil’.

Over the following years the torpedo would continue to develop with many different variants while always remaining faithful to the initial design concept. The torpedo is a versatile weapon and can be easily be transported and utilised to inflict death and destruction by being launched from aircraft and surface vessels alike. 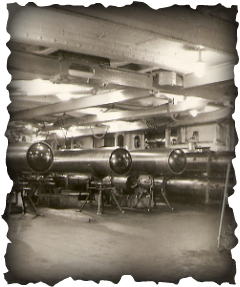 Torpedoes on HMS Medway
Around the time of World War Two a single torpedo would have cost the Admiralty approximately £2,000. In today’s money that would be around £79,000 per torpedo. This is a huge figure nearly 40 times more than it cost back then, although in 1940 £2,000 was still a vast amount of money.

The torpedo was being manufactured at this time in the RNFT factory at Greenock and also commercially built by the Whitehead torpedo company based at Weymouth Dorset. In 1940, towards the end of her build, and subsequent trials, Unbeaten was fitted with the MK VIII torpedo. Each weapon had a speed of approximately 40kts and weighed in at 2,253lbs. The torpedo could travel out to a range 7000 yards at this speed and packed a charge of 750lbs of Tri-Nitro-Toluene (TNT) in its High Explosive nose.

This HE was sometimes substituted with AMATOL. After 1943 Torpex was introduced as an explosive. This MK VIII variant of torpedo was first introduced in 1928. Surprisingly, an only slightly modified version of the MK VIII was still being used by the Royal Navy as recently as 1982, and played an active part in the Falklands conflict. The MK VIII was only withdrawn from the service of the Royal Navy in the early 1990’s. 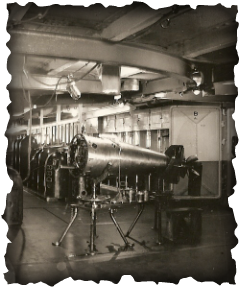 Aft Body Section: Authors Collection
To understand the powerful capabilities of the MK VIII torpedo we must understand how it was constructed and how worked. The MK VIII was manufactured in four sections. The 6.5mtr weapon was made up of the Head, Fore-body, Aft-body, and Tail. The whole weapon contained around 6,000 parts. The torpedo was pushed through the water by a propeller which was turned by a shaft in the tail section.

The torpedo also had a gyroscopic rudder controller to keep it on course. The propeller shaft was driven by a Brotherhood Burner Cycle engine (BC) which was contained inside the after body section. (See photograph left & note the warheads on the deck) A torpedo was sent on its way by a blast of compressed air. Once clear of the tube it would run on its own BC engine. The after-body also housed a hydrostatic depth control which was set by the submarines torpedo handler, as required, prior to firing. The hydrostatic control kept the torpedo at a constant depth.

The fore-body section was filled with a compressed air chamber and in-front of that was the warhead section containing the explosive charge. This was detonated by a firing pin or magnetic pistol called the Duplex Coil Rod (DCR) which should operate when the torpedo passed under the steel hull of a vessel. The massive explosion and position of the torpedo was designed to break the ships back. However this arrangement did failed numerous times. In some cases the Royal Navy reverted back to the older contact style pistol. But despite its failings the DCR type of pistol remained in service with the Royal Navy until 1943. 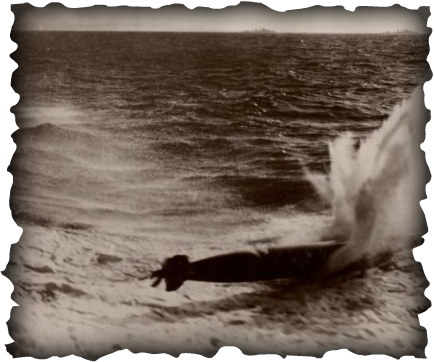 Despite some failings in its early initial design this chilling device would remain the most versatile method of destruction from its conception up to the development of the Atomic Bomb. Figures gathered at the end of World War Two show that approximately 5,121 torpedoes were fired by British submarines. Out of this amount 1,040 were said to have been certain hits, however, this number may be over-stated. Needless to say without this terrible weapon 25,706,096 tons of merchant shipping would still have remained afloat. But instead it now sits on the sea floor, having taking with it countless lives. This massive figure does not include the military ships, submarines and their crew sunk during World War One and World War Two.