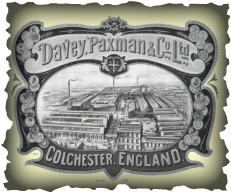 Courtesy of Richard Carr
There were two vast chunks of machinery, worthy of note, without which Unbeaten would fail to move through the water.

The items in question were of course, her two diesel engines. These power houses were built by Davey Paxman & Co of Colchester, England. Founded in 1865, Paxman’s had a long association with the Royal Navy going back many years. In-fact the company’s involvement in building diesel engines for submarines goes back to before World War II. It has been said that Paxman manufactured nearly two thirds of all the engines fitted in the World War II British submarine fleet.

Courtesy: Royal Navy Submarine Museum. U-Class Submarine Engine Room
The U-Class submarine was one of the first British submarine types to be complimented with diesel-electric drive propulsion. Unbeaten was fitted with two 6 cylinder Admiralty-designed engines; each had an output of 307 bhp, which in-turn powered two electric generators. The diesel engines were not directly connected to the propellers. The generators in-turn provided the power to the electric motors via two large batteries which finally drove the twin propeller shafts. The two electric motors had a combined rating of 825 bhp and were built and supplied by General Electric.

When the submarine was at sea the crew would have to carry out a charge on the batteries. This meant the submarine would have to surface. This in-turn allowed the exhaust from the engines to vent into fresh air. The charging evolution was usually carried out during the dark hours. The boat would then perform that famous term ‘we dive at dawn’. It was very risky to be on the surface during daylight hours.

Thanks to Richard Carr for allowing me to use material on his Paxman History website at: www.paxmanhistory.org.uk

The book 'Being Silent They Speak' goes into greater detail about Unbeaten's engines, and talks about the Stokers on-board, who worked tirelessly, in unbelievable conditions, to keep the engines running and well maintained.