By 1940, the Anti-Submarine Detection Investigation Committee (ASDIC) had already been developing its underwater listening equipment for nearly 20 years since its conception in 1920. During World War I, submarines had used a piece of equipment called a hydrophone to listen underwater. HMS/M Unbeaten was fitted with hydrophones port and starboard forward, and one on the conning tower facing aft. The advances of ASDIC were to provide the Royal Navy with a more sensitive and directional system for hunting surface craft. Subsequently, to the detriment of submarines, they also provided ships with an underwater searchlight capability that allowed surface vessels to detect and hunt submarines.

During the inter-war years, the O-Class submarine HMS/M Oberon was the first boat to be fitted with this new active acoustic listening system. This advance in technology allowed Allied submarines the capability of measuring an enemy vessel’s course and speed, along with its distance away from the eavesdropping submarine. This valuable bit of equipment also gave submarines the means of talking to each other underwater while not being heard by surface ships (unless they were also ASDIC-fitted). 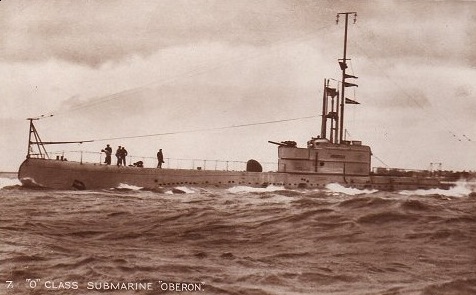 An experienced and well-trained operator of the hydrophones and ASDIC listening devices could often confidently identify an enemy vessel by its propeller revolutions, shaft rate and blade count. In order to facilitate the submarine ASDIC operators and allow them to practice this art and also provide the command with detection and evasion training, it was normal and essential for submarines to carry out ASDIC running. This was combined with acting as a target submarine for ASDIC-fitted ships that were also under training.

When Unbeaten was at Dartmouth conducting ASDIC running in early 1941 she berthed, lined out in a trot, running up the centre of the River Dart. The submarine was attached alongside one of 50 ex-United States Navy, four-funnel Flush-deck destroyers from World War I. This ageing ship and the 49 others like her that would be dotted around Great Britain and at sea were negotiated for by Winston Churchill to help in the war effort. They were given to the Royal Navy by America in exchange for a 99-year lease on British bases in Newfoundland, Bermuda, West Indies and British Guiana. By offering these ships to Britain at this point during World War Two, President Roosevelt did not want to be seen by the outside world as violating United States neutrality. However, what is not widely known is that privately Roosevelt thought, when faced by the might of Germany and their Axis allies, a small country like Britain was sure to capitulate. It was feared by America that if Germany occupied Great Britain and her colonies, this would allow German forces to be based in the Caribbean and bring the USA to within Hitler's reach. 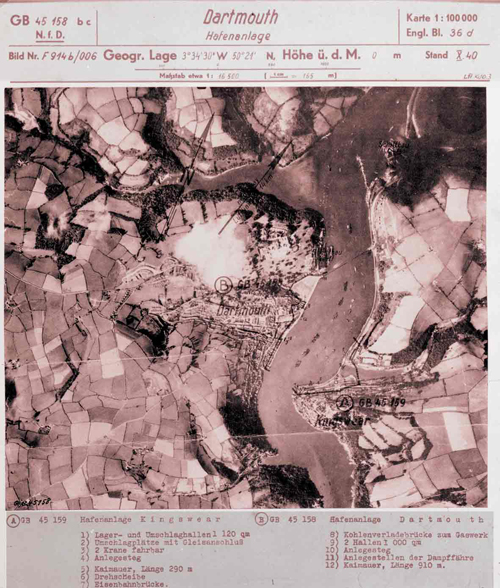 WW2 German aerial view of Dartmouth (Note ships lined out on a trot)
This underwater listening device needed to be kept a secret for obvious reasons and it would remain so for the early part of World War II. The Type 129 ASDIC dome was fitted on the U-Class submarine towards the bow on the keel, just below and in front of the fuel and fresh water tanks. It is safe to say that ASDIC played a major role in submarine and anti-submarine warfare during World War Two.