The Eight Tooth Replica as seen on eBay... twice!! 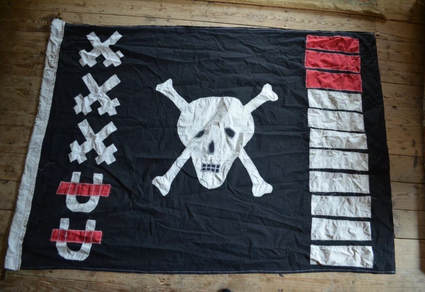 The Eight Tooth replica of Unbeaten's Jolly Roger is an attempt at copying the David J.B. Smith replica.

This flag was first sold on eBay in 2016 and was purported to be original. This flag was sold one year after David J.B. Smith manufactured his replica to which this flag bears a striking similarity.

Note the letter and numbers spelling N93 on the top left edge of the flag. This would not have been present on the original success flag. 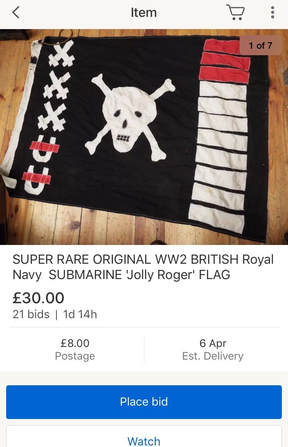 The Eight Tooth replica of Unbeaten's Jolly Roger reared its skull on eBay again for the second time in April 2017.

​This time the N93 has been painted out on the top left edge of the flag. However, by looking at the positioning of the third white bar from the bottom, one can see that it is the same flag as above.

This replica eventually sold for £107. Prices realised by original submarine Jolly Rogers sold at auction can vary between £5,000 to £10,000 depending on the actions of submarine involved.
The new owner of the Eight Tooth contacted the author on eBay after reading about HMS Unbeaten on this website. Being a collector of militaria and ex military, he soon realised the flag was a replica. This flag has not appeared on the open market since... or has it?
back to main page